Heike Masuch grew up in Bad Segeberg, Germany, and had stops at several stations before coming to work in the shipping industry. She initially studied sport and technology and worked as a teacher, but even back then she was interested in sailing, ships and shipyards. After several years working at Greenpeace and sailing on various ships, she finally ended up studying nautical science and started her current career. 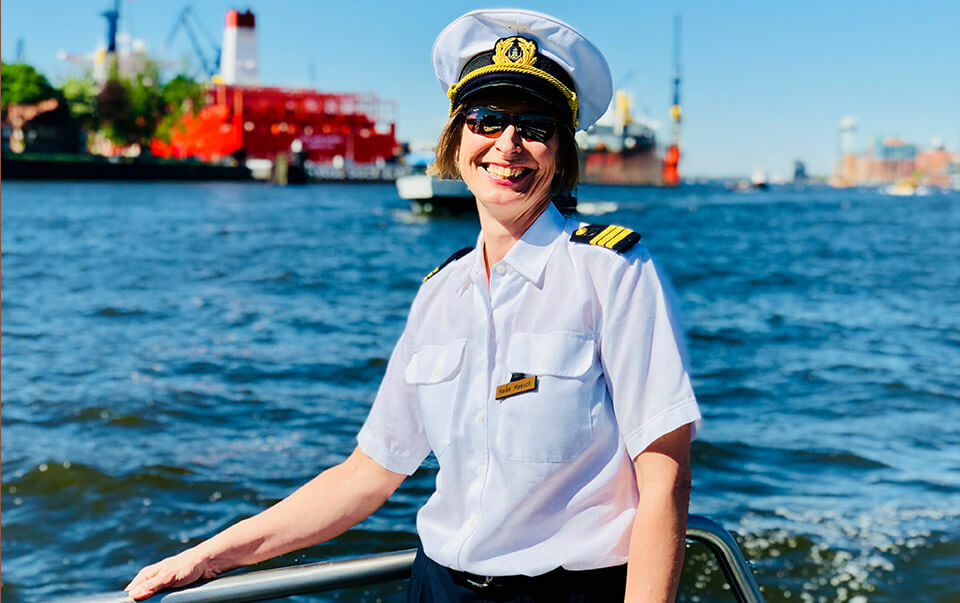 Do you still remember when you were a child and what you wanted to be when you got older? What came of that?

As a child, I actually wanted to be a farmer. But one time I helped a classmate at a farm for a while and then I quickly decided it wasn’t for me. You don’t have holidays, you have to take care of the cows every morning and evening every day. I thought it was exciting and great, but not the right thing after all. After finishing school, I took my first steps out into the big wide world and worked as a nanny in France for a year. I really enjoyed that! I not only learned the French language, but also took on their savoir-vivre.

After that, I became a teacher and worked at a great school for ten years in a deprived area in the middle of Hamburg. When I started to get more and more disappointed in the job, for various reasons, the topic of ships, sailing, yards, repairs, etc. became increasingly stronger in my mind. I was hired on to sail with various sailing ships and worked for Greenpeace. This was followed by my studies in nautical science in Bremen, and afterwards I went on board for a few years as an officer.

How did you end up at HPA and what do you do here?

I wrote my master’s thesis on pilot ships and this led me to contacting HPA. At some point, I found working at sea not really compatible with having a social life, and so I applied for an open position at HPA. I first worked here in the Nautic Centre, navigating ships safely on the Elbe. Today, I work in the HPA building in Neuer Wandrahm in the Speicherstadt. Here, I’m responsible for major nautical events and construction projects, and for all special activities that take place on the water.

Which tasks do you have to face every day as a nautical specialist and what is especially challenging?

The daily business involves a lot of organisational work and public authority paperwork. For instance, I issue shipping police licences, define behavioural measures and rules, collaborate with pilots, coordinate. The amount of work is very different depending on the topic. Everything that is built or repaired on or in the water is what I have an overview of. When someone cannot sail anymore as they are used to, that’s when I come in. I give clear instructions on keeping space, on closures, on behaviour or sailing more slowly, etc., and everyone has to listen. During the planning of big events, such as a ship naming ceremony, I have to see what is possible on the water in collaboration with the other players.

In addition to this, there is naturally also the unusual and unexpected events. These could be incidents or things that need to be repaired immediately. Like when a quay wall threatens to give way, for example, I have to decide what this means for transport on the Elbe and the actions of the captains on the water. Then I naturally contact the port pilots and comply with the port traffic and shipping laws as well as a host of other laws, such as the port traffic regulation or the regulations for pilots. Of course, I always have a certain amount of leeway when it comes to taking decisions. I normally work in the office, but am frequently out and about on service barges when I have to take a close look at things that are happening on the water.

You play a key role during Hamburg’s Harbour Birthday. What do you do precisely as the head of the parades?

First of all, I naturally have to plan the parades precisely. For this, I take a look at the berths, which my colleagues have allotted to the ships, and see which ships will be where in the harbour. Then there are the ships in Övelgönne or Sandtorhafen, for instance. They sign up to participate and I then put them in an order: who can be first, who has to sail where and who passes whom. The berths often determine the positions in the parade. The participants then get forms which they must sign and that contain the exact sailing instructions, when it is who’s turn, how fast they should sail and where they have to turn around, etc.

Then the big day arrives, and I’m naturally on the water myself, together with the water police and the fire brigade. I’m reachable at all times via radio. Channel 10 is the parade channel on which the entire loop of communication takes place. We communicate via radio and I give the commands, for instance, when someone should sail faster or slower. During the Opening Parade, everyone queues up and the lead ship sails from Bubendeyer bank in Finkenwerder to “Rickmer Rickmers”. Then there are three gun salutes and the official opening by the mayor, before the water programme starts at Landungsbrücken. I’m out on the water for the entire three days. Before the fireworks on Saturday, I coordinate one again with the captain of the AIDAperla. And I also like to visit the participating ships and ask the visitors who are partaking in the Harbour Birthday for the first time how the parade was, or I discuss a special weather situation.

What could go wrong and has a large incident ever occurred?

The worst thing of course would be a stupid accident in which people are harmed. This could happen to the captains, but luckily never has. One difficulty, though, lies in the weather; you never know how it will be. This is a really big uncertainty. The past few years were quite windy and a storm was forecast, so that we had to leave more distance between the ships for the parades, and the ships in the parade wanted to be led to different port basins. But then the storm never came. Luckily, we’ve only ever had smaller ship accidents with little damages. However, two years ago, the Closing Parade was reduced in size due to poor weather. But a really big incident? We haven’t really ever had one.

Aren’t the parades about the same every year, or do you always think of something new?

Well, we have the same big ships as last year: the “Sedov”, the “Mir” and the “Kruzensthern”, but we had other ships the year before. Different navy ships participate; this changes a bit every year. Otherwise I could always use the same plan and spare myself all the work. And I never know ahead of time which ship will sign up again for the next year. This means all the parades look different every year.

About how much time do you need to prepare the Harbour Birthday?

We actually need the entire year – after the Harbour Birthday is before the Harbour Birthday. Usually, the first participants sign up for the next year immediately following the end of the current year, which is interesting. We don’t only plan the Opening and Closing Parades, after all – there are also lots of other things which we have to define in working groups for the Harbour Birthday. We also spend a lot of time on determining dangerous situations. The topic of safety on land and on the water has naturally gained importance in the past years, especially for large-scale events. This is good and important, but it is also a lot of work.

What’s the best thing about your job?

Generally speaking, what I like about my job are the moments of surprise! There are routine tasks, but it is also a job with a lot of variety, as everything can always be looked at in a different way. And I like that I meet so many people. I think it’s really exciting to get to know the ships and the captains, with their different conditions and experiences. And I’m fascinated by the unusual ships, which have a special powertrain, a special request or an eye-catching design. At the Harbour Birthday this year, I’m looking forward to the “Energy Observer” above all. It’s a catamaran powered by fuel cells and is stopping by in Hamburg on its worldwide tour. Two years ago, it was a ship from Sea Shepard, an organisation that promotes the saving of the oceans. I think it’s also exciting that they participate in the celebrations and do so much public relations work.

How do you cope with stressful situations?

In the very moment I actually just breathe in and out; otherwise with lots of exercise! To get my mind clear, I like to go rowing and climbing. That’s how I balance out my life.

You are also responsible for the naming ceremonies of cruise ships. Do you sometimes also get wanderlust and if so, where do you go?

I actually like to travel a lot! In the past years, the mountains have drawn me in more than anything. I can hike from mountain cottage to mountain cottage and climb. Most of all, I like Italy, France, Austria and Majorca.

Is everyone at home also under your command?

Of course everyone listens to me (laughing). What kind of question is that? No, of course not. That would be terrible.

What do you like to do most after work?

I really like to cook and eat, meet up with friends and family, love to be cooked for. And I also like being outdoors, I like to go out into the garden and I love flowers. I always look forward to the first spring snowdrop flowers; that was really great again this year.

Which spot in the harbour fascinates you the most?

I actually like being on the water everywhere in the port. The exact spot is almost irrelevant. The view is constantly and wonderfully changing because you are continually moving. And I like to look at it from above. For instance, I’ve always been fascinated by the Köhlbrandbrücke, and driving over the Köhlbrandbrücke is simply grand. And I like the view that the Elbphilharmonie gives us here in the port. Seeing it sparkling at dawn or dusk is really something, also from various perspectives.

Thanks for the interview.