HYDROGEN AND SHORESIDE POWER: our drive for the future

CLIMATE PROTECTION AND AIR PURITY IN THE PORT

We at Hamburg Port Authority (HPA) see sustainability not as an inconvenient obligation, but as a contribution to the future that pays off. For this reason, we are committed to future-proof and innovative technologies and their use in the port, supporting decarbonisation and the City of Hamburg’s air purity plan. The measures that HPA has taken include the development of a green hydrogen infrastructure as well as providing access to additional climate-neutral energies, the set-up of shore power systems, reduced port fees for eco-friendlier actions and more.

• Hydrogen as an energy carrier
• Various types, depending on the source of energy: Green H2 based on renewables, Blue H2 based on gas and carbon capture and storage (CCS) and Grey H2 based on fossils
• Green hydrogen is carbon-neutral
• Available in a gaseous form and as a liquid (‒253°C)
• Transportable in various forms: LH2, ammoniac, LOHC or methanol

Air purity in Hamburg is an important challenge that concerns the entire city. And the Port of Hamburg plays a leading role here. The City of Hamburg is responsible on two levels: ensuring the mobility of people and transport of goods while minimising any negative health effects. For this reason, Hamburg’s air purity strategy covers a number of innovative projects and the development of public transport, as well as the support of electric mobility and individual traffic-limiting measures such as hydrogen and shore power.

We would like to showcase some of the measures being taken by Hamburg Port Authority (HPA) involving hydrogen. They are a part of the air purity plan for Hamburg, which was drafted in its second version back in June 2017. The aim: to guarantee compliance with average annual NO2 values as quickly as possible and thus reduce the number of affected residents to a minimum.

The onshore power station, which was commissioned by HPA and installed by Siemens, was launched as a pilot project in 2016. As there is no other similar station like it in the world, the comprehensive and extensive test phase enabled us to gain valuable experience.

Ever since April 2018, with the calling of the AIDAsol cruise ship, the onshore power station has been in regular operation at the Altona cruise terminal for about a year.  The AIDAsol has been supplied with eco-friendly power from ashore twelve times in the past season, nine times of which it received full supply. During this time, the ship’s own generators were shut down completely while in Hamburg and the ship was supplied with emissions-free power from its berth. In the cruise ship season, the AIDAsol has planned 22 fixed calls, and potential new customers for onshore power will be testing the system.

“For HPA, the operations of the onshore power station are a true story of success,” says Tino Klemm, CFO of Hamburg Port Authority (HPA). “With the installation of this station, we have successfully tread a new path of technology. In the meantime, we have been able to establish regular routine operations and are delighted about the ongoing demand. Thanks to the onshore power station, we have made an important contribution to making the Port of Hamburg even greener.”

“Together with partners from the research, academics and science, business and politics realms, we have been performing pioneering work for many years in the area of alternative power-generating technologies and more modern environmental technology. We invest millions of euros in these each year,” explains Dr Ali Arnaout, Senior Vice President & CFO for AIDA Cruises. “The onshore power station here in Altona in Hamburg are a significant contribution to further improving the air quality in the Port of Hamburg.”

To mark the startup of regular operations, the HAMBURG ENERGIE city municipality, AIDA Cruises and HPA closed a contract for power supply. The supply solely involves energy from renewable sources. “HAMBURG ENERGIE strives to drive forward the energy revolution responsibly,” says project head Jörn Fedder, from HAMBURG ENERGIE. “We are taking care of supplying eco-friendly power throughout the city, and also to the water, by supplying cruise ships in the Port of Hamburg with green onshore power.”

Within the scope of the port fees, HPA offers various tariffs which reward environmentally friendly ships by offering a bonus. To achieve improved air quality within the port faster, HPA provides a discount on port fees for the use of eco-friendly port power. Oceangoing cruise and container ships can save up to 3,000 euros in this way. This reward from HPA aims to convince port users that they should avoid the use of ship-generated power while at birth.

HPA understands port power to be, for instance, the use of onshore power stations like at the Altona cruise terminal. We are focusing mainly on cruise and container ships because these have a relatively high consumption of power due to their function and ship profile. We can achieve improved air quality quickest when the shipping companies implement the respective measures.

Additional motivation for the use of environmentally friendly ships is provided by HPA with discounts for the use of tankers with double hulls, the use of LNG and of onshore power. Certification according to the Blauer Engel as well as through the “Green Award” are honoured, too, for particularly eco-friendly or safe ships. 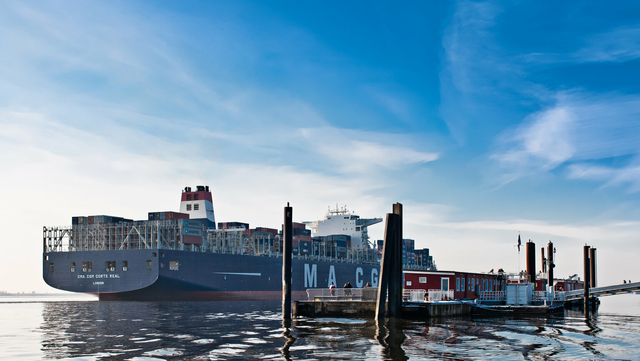